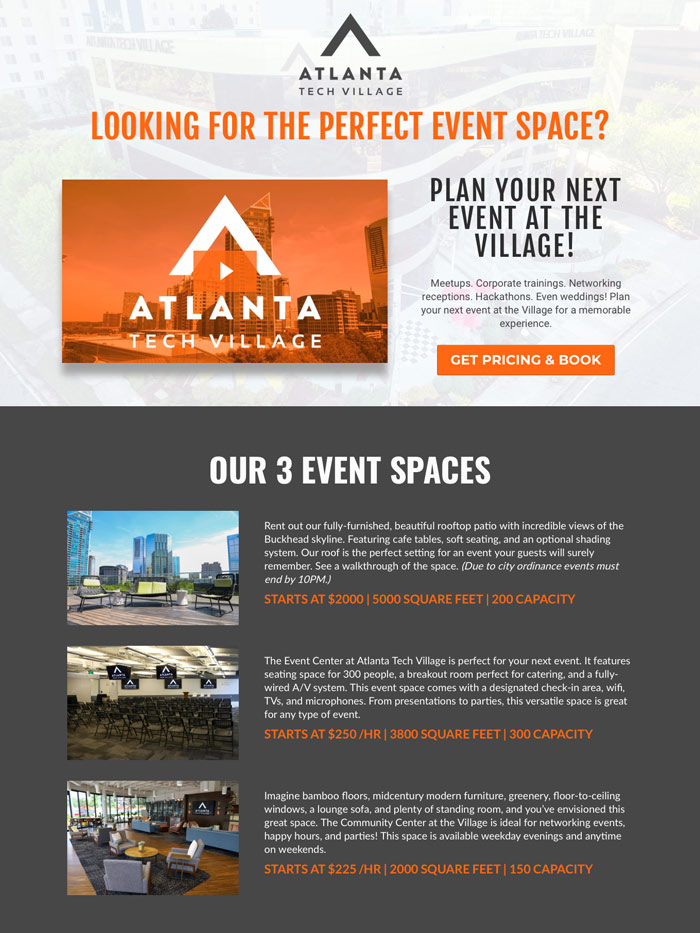 The Short Version of the Story

The Atlanta Tech Village is the 4th largest tech coworking space in the nation and they have been providing startups and entrepreneurs a collaborative work environment for years now. One thing they were not as well known for is their beautiful event spaces perfect for a variety of events.

The events staff works their tails off for their clients and they do everything they can to make sure that the client’s event is an amazing one, but they were so busy managing their existing work load they barely had time for marketing for new events. What they needed was someone to help them manage their ad campaigns and ensure that the money being spent lead to qualified leads.

We partnered with Juxt Media and worked closely with them to zero in on the perfect strategy to help them drive more leads through well produced videos and highly targeted ad campaigns. The result? Leads pouring in every day and new events being booked on a regular basis.

The Atlanta Tech Village is one of the best places in the city of Atlanta for startups of all sizes to build on their ideas, network with other entrepreneurs, launch or scale a company, and access mentors with various skills to guide them along their journey. It is also one of the best places in the city to host an event. Word had been out for years that ATV was the place to be if you were building a startup, but not as many people were aware that the space was perfect to host events of all types.

From meetups and networking happy hours, to corporate trainings and seminars. They have hosted over 3500 events in the 7 years they have been in business and for good reason. The spaces are amazing for events of all types, they also come equipped with pretty much everything you need to run a successful event, and the staff is very accommodating.

It was this combination but a booking calendar that had thinned out a bit over the years that got us involved with their events team, Kaitlyn and Hilton to drive leads for their event space bookings. We pitched them on recording a few videos showcasing each of the spaces and letting Kaitlyn and Hilton’s personalities shine. They are fun humans and great to work with and we wanted that to be obvious from the get go.

So we setup our cameras, got them to loosen up a bit, and scripted on the fly with a few bullet points of what to touch on. In this case we knew that most of the information anyone searching for event spaces was looking for would be included in the spec sheet they received after filling out the online form on the landing page, so the most important aspect of the shoot was to capture the modern and inviting spaces available for rent at ATV while letting Kaitlyn and Hilton have fun with it.

Mission accomplished. We managed to capture some amazing footage of the event spaces, and let the welcoming personalities drive the clicks to convert into prospective clients for ATV.

The Atlanta Tech Village was known as an amazing space to grow a startup, but not as popular as an event space for various gatherings. They had attempted Google Ads in the past, but did not have much luck. They were spending money on the ads but not really driving the kind of leads they were looking for.

We decided that showing people that found them through ads that the spaces were amazing and the ATV event staff were fun, welcoming, and professional was the way to go. Additionally, the ads would need to be highly targeted as to avoid driving leads that were looking to throw an event that would not work with their space, thus wasting the precious ad spend. We then designed a landing page that provided all of the necessary information and clear CTAs.

The result is an ongoing ad campaign that is driving almost one quality lead per day and has lead to several events booked. They are thrilled with the results and after a few months of tweaking the ads to drive more of their ideal client, we have zeroed in on driving highly qualified leads with a predictable cadence. Another huge win in addition to driving so many qualified leads their way was dropping their average cost per click  from $3.28 to $1.20. This took a lot of maintenance and upkeep of the ads, but it has paid off as they not only get more impressions and clicks now from more highly targeted prospects, but they are spending less than half of what they were before.

A Word From The Client

We hired nobox creatives to create a series of short videos promoting the event spaces at Atlanta Tech Village and we love them! The videos are fantastic and just what I was looking for. Working with nobox is easy, and they make the creative process painless. I highly recommend! 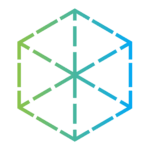 How can we help?

Just a heads up, we are most responsive to email, and if you would like to reach out by phone please be sure to leave a voicemail. REACH OUT AND LET’S GET TO WORK!